Only 4 U.S. teams have ever won in the 30 year history of the Brick

America won, for a change.

Normally dominated by top-level Canadian youth programs, the 30th annual Brick Invitational — an Edmonton-based tournament comprised of teams from the United States and Canada — was claimed by the Connecticut Junior Rangers Elite AAA Club, which shocked the bracket and became the first team from the States to win the tournament in 17 years.

“It was an unbelievable experience for the kids and parents involved,” CJR Brick head coach Jeff Hamilton said. “To be honest, our chances headed into it were slim. Beforehand, I told the parents that this tournament is nearly impossible for an American team to win. It speaks volumes about how the kids have performed and bought into the process. The kids earned it.”

The Junior Rangers feature players from the Tri-State area (New York, New Jersey, Connecticut) and had a dominant mix of players this time around. The team went 8-0 in the round-robin tournament and won the Division 1 Wigston Conference.

In the championship game on Sunday, July 7, the Junior Rangers defeated Team Brick Alberta, 3-2 in overtime.

Kaden McGregor scored the game-winning goal in overtime for Connecticut 26 seconds into the first overtime period, and Matthew Koch had the assist on the score. James Jackson and Ethan King also netted goals in the victory, while Luke O’Neil recorded 21 stops in net.

O’Neil and Jackson Soshnick split time in net during the tournament; Soshnick made three starts and four total appearances, while O’Neil made the other five.

Throughout the tournament, however, there were a number of strong performances up and down the roster.

“We really did it by committee,” Hamilton said. “We were one of the highest-scoring teams to come through the Brick. We had all three lines going. Our defense was phenomenal. The two goalies did great. I probably had nine centers on the team, so we had six kids playing wing probably for the first time. It was kids buying into doing whatever they could to help the team win, whether it’s blocking a shot, winning a faceoff, playing four minutes in one period and ten in the next. The players filled their roles with pride.”

Hamilton noted one challenge when putting the team together in the spring was the broad coalition of players. By the time the tournament came around, however, he was impressed by the way they competed as a team.

“Sometimes, it’s difficult putting these All-Star teams together,” he said. “We had 11 different organizations represented. They all had their own instructions on how to play — whether good, bad or just different.  We then had to get them adjusted into our system. It takes time. This year, they bought in from day one. We struggled throughout the spring, but along the way, you could see the kids were learning. I think all of the pieces finally fell together when we were at the Brick. Had the tournament been three weeks earlier, I don’t think the outcome would’ve been the same.”

In the CJR style of hockey, versatility is key. Hamilton said he sees the importance of having young players gain experience all over the ice and in different situations as they continue to grow.

“I think it’s invaluable for these kids,” he said. “I see it in all age groups. When I see a 7- or 8-year-old kid come up to me and say, ‘I’m a right defenseman,’ I say, ‘No, you’re not, you’re a hockey player.’ You’ve got to learn to play all of the positions and learn to play the game. You don’t get that being pigeonholed as a forward or on defense at a young age. During the winter, I coach a ’08 team and it’s been incredibly valuable for the kids and their development to rotate them all through these positions.”

Hamilton said the program’s coaching staff is a major reason for its success. He said the key is to find “the right coach,” which means they rely on a mix of professional coaches and parent coaches. He noted that of the parent coaches, there are former Division 1 players, and former professionals helping out.

Although the Connecticut Junior Rangers’ victory in this year’s Brick Invitational tournament might feel recent, they already have moved on to preparing for next year’s rendition.

On Aug. 17 and 18, they will be hosting their annual CJR Brick Summer Training and Evaluation Camp. Next years’ team will be open to players born in 2010 and the camp is open to players from 2010-2013 birth years.  The summer camp is the first of three evaluation events used in the selection process for the 2020 Brick team. More information on it, including how to register, can be found at CJRHockey.com. 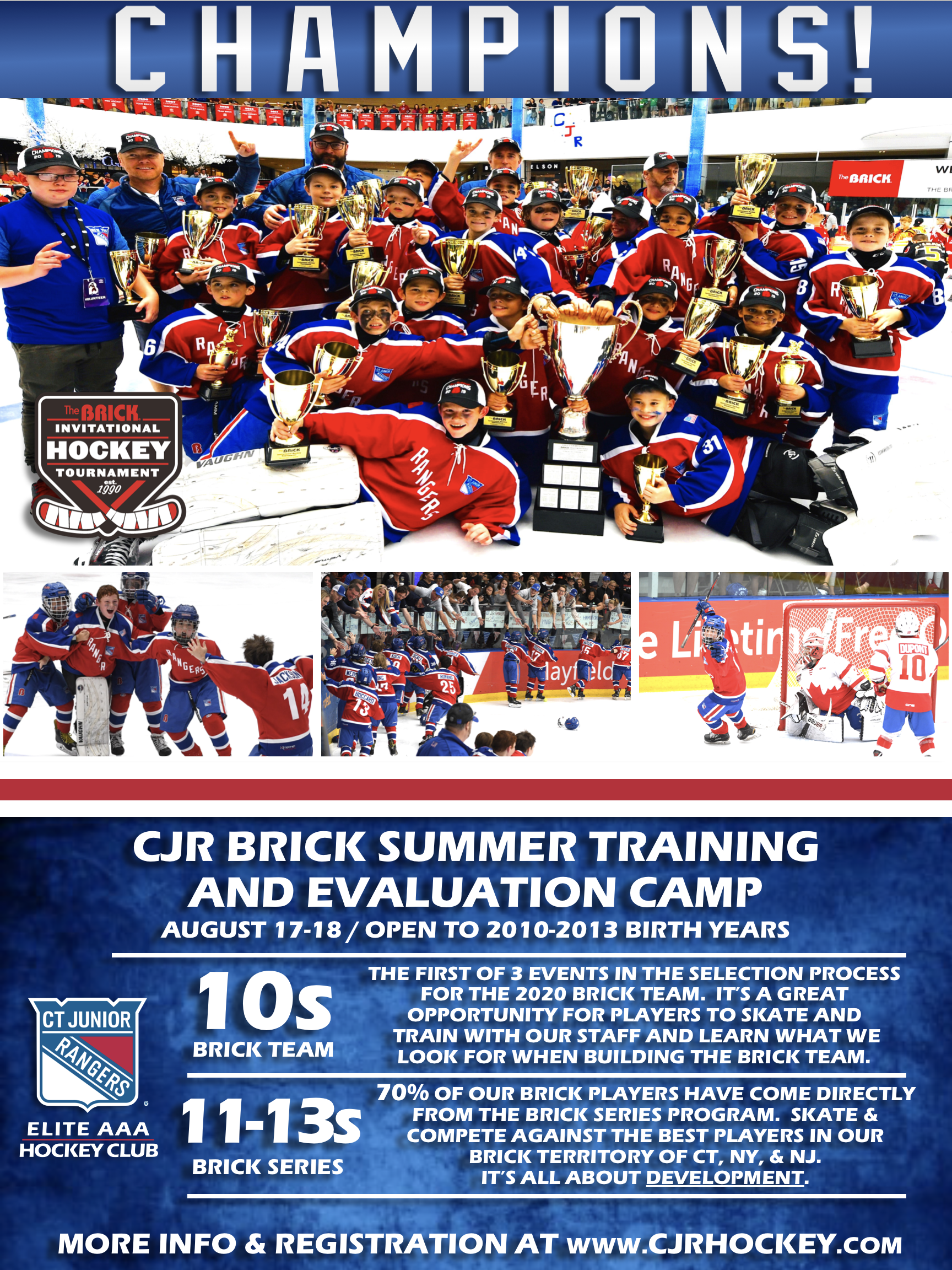